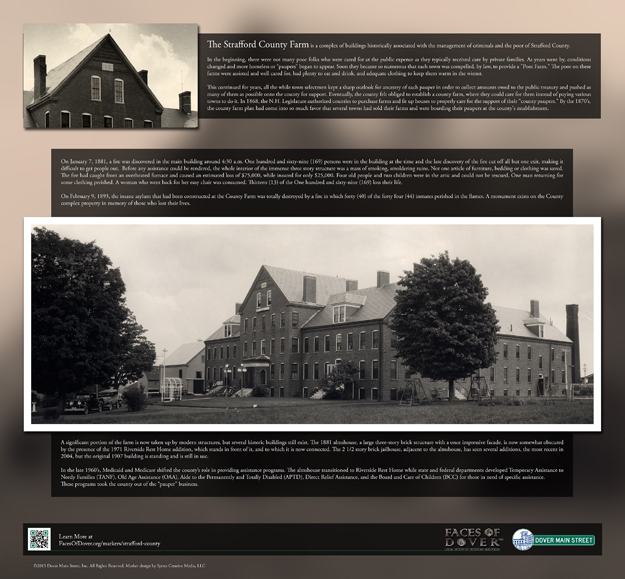 In the beginning there were not many poor folks who had to be cared for at the public expense as they were usually cared for by private families.

As years went by conditions changed, more homeless persons or “paupers” began to appear. Soon they became so numerous that each town was compelled, by law, to provide a “Poor Farm.” The poor on these farms were assisted and well cared for, had plenty to eat and drink, and plenty of clothing to keep them warm in the winter. This continued for years. But all the time the selectmen kept a sharp outlook at ancestry of each pauper in order to collect amounts owed to the public treasury and pushed as many of them as possible onto the County for support. Eventually the County felt obliged to establish County farms where they could care for them instead of paying various towns to do it. In 1886, the Legislature authorized the Counties to purchase farms and fit up houses to properly care for the support of the “County paupers.” By 1868 the County farm plan had come into so much favor that several towns had sold their farms and were boarding their paupers at the County’s establishment.

On January 7, 1881, a fire was discovered in the main building on the Strafford County Farm about 4:30 o’clock in the morning. At the time of the discovery, the flames had made great headway and many rooms were filled with smoke. One hundred and sixty-nine (169) persons were in the building at the time, and great difficulty was experienced in getting them out of the building. The main entrance was cut off by fire, leaving but one exit.
Before any assistance could be rendered, or any effective efforts put forth to stay the progress of the rapidly spreading flames, the whole interior of the immense three story structure, with the entire household contents, was a mass of smoking, smoldering ruins. Not one article of furniture, bedding or wearing apparel was saved. Lack of water rather than lack of appliances was the cause. The fire had caught from an overheated furnace. The main entrance was cut off by fire which left but one exit. The estimated loss was $75,000, while they were insured for $25,000. That was nothing compared to the loss of life.

On February 9, 1893, the Insane Asylum that had been constructed at the County Farm was totally destroyed by a fire in which forty (40) of the forty four (44) inmates perished in the flames. A monument was erected on the county complex property in memory of those whom lost their lives.
A significant portion of the farm is now taken up by modern structures, but several historic buildings still exist. These include the 1881 Almshouse, a large three-story brick structure. This building’s once impressive facade is somewhat obscured by the presence of the 1971 Riverside Rest Home addition which stands in front of it and to which it is now connected. In 1907, the County built a 2 1/2 story brick Jail adjacent to the Almshouse. Several additions to the original Jail have been built, the most recent one went going into service in 2004, but the 1907 building is still standing and in use.

With the institution of Medicaid and Medicare in the late 1960’s, the County’s role transitioned. The Alms House transitioned to Riverside Rest Home, and the County role in providing additional assistance changed as well. Other changes to assistance programs included Temporary Assistance to Needy Families (TANF), Old Age Assistance (OAA), Aide to the Totally and Permanently Disabled (ATPD), Direct Relief Assistance, and the Board and Care of Children (BCC). These programs took the County out of the “pauper” business.

For more information about the Fire at the Poor House, Click Here and Here.